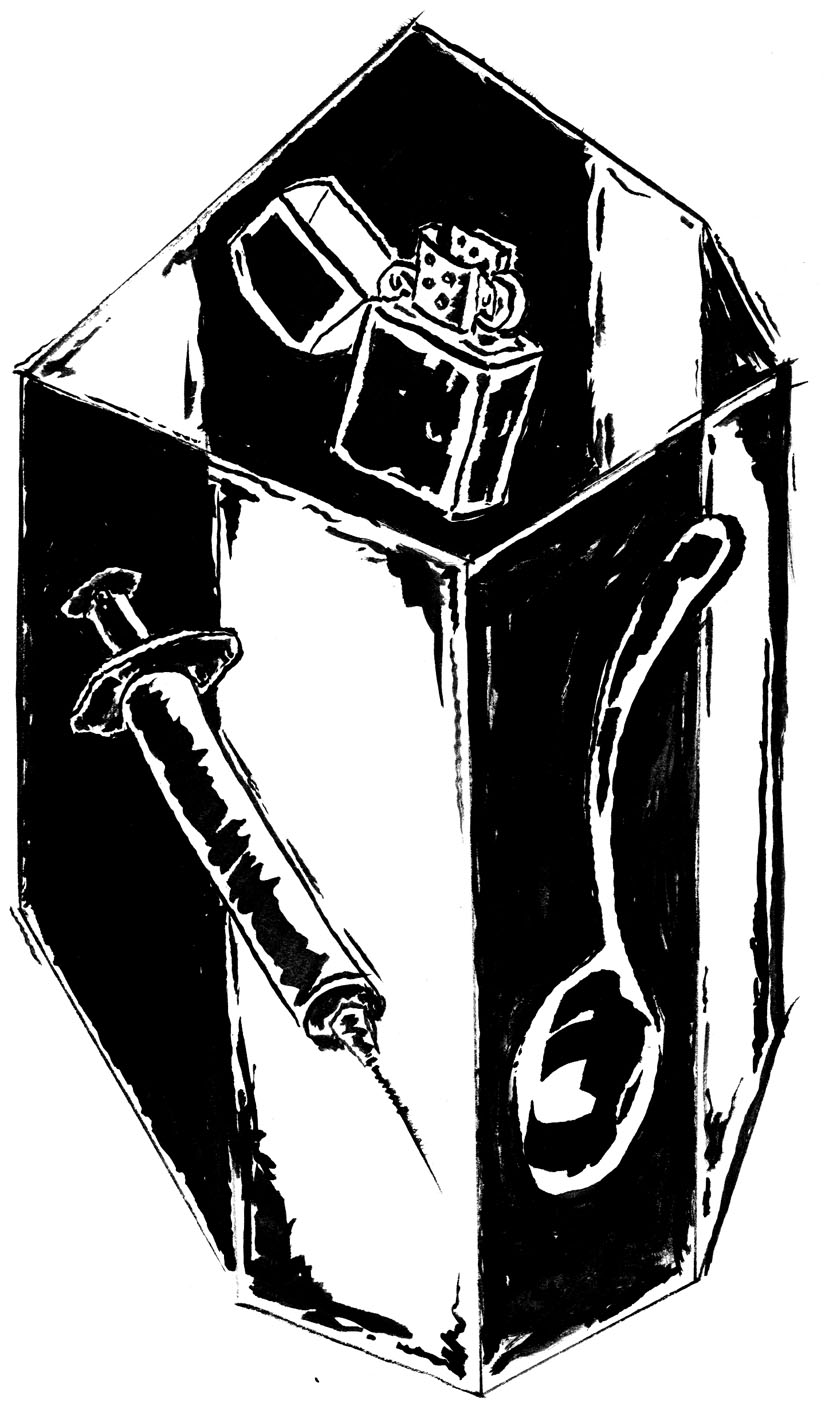 I found Mother outside in the chaise lounge, watching a TV she’d strung through the window of the double-wide. Flopped next to her on the patio table sat a large-print book on Astral Projection and a couple of her favorite crystals. This big chunk of obsidian and a thick slab of quartz. She’s getting up there, Mother. Complains about her veins, her arthritis. But she’s got a sharp mind. Still crazy as ever for that off-brand religion. Stray prophets and ancient texts. Alien monuments on the surface of Mars. She was dressed in her usual stretch pants and flip-flops. Had her T-shirt from the Worm Grunting Festival up in Sopchoppy. She was rubbing the crystals and going through the receipts from The Royal Palms. That’s our motel. Or rather her motel. Which I manage.

“Aren’t those our criminals?” she said, pointing at the TV. The screen showed grainy footage from a surveillance camera of two boys waving automatic pistols around a bank in Pensacola. “Maybe you ought to call the police.”

“They checked out days ago,” I said. Actually, they left in the middle of the night, having absolutely trashed our number 10 unit, down at the end of the motel.

“There was a fire fight,” she said. “Killed a guard at the bank.”

I popped the top off the beer I was holding and scratched my belly through my open shirt. It was one of Dad’s old shirts, covered with Mai-Tais and naked ladies.

Mother looked at her watch. She shot me this long, deadly stare over the beer.

“Amounts to the same thing,” I said, “whether you get drunk alone, or you’re the leader of nations. That’s JP Sartre.”

“You should have never gone to college,” said Mother, “if that’s all you were going to learn. Look at Rodger.”

“The Cock-Doctor?” I said. My brother, the go-getter of the family. Skipping grades and getting scholarships. Now he’s a plastic surgeon down in Boca Raton where he specializes in cocks. Claims he can find you another two inches in there.

“Don’t be ugly,” said Mother. “And speaking of those criminals, have you cleaned out unit 10 yet?”

We’ve got daily rates at The Royal Palms, or you can pay by the week or month. That’s what these guys had done. They seemed all right when I first checked them in, but after a few weeks, this huge pile of garbage lay out front of unit 10. The Astroturf smelled of piss. They’d broken our patio furniture, ripped up the fence, and they’d tossed our pink flamingos into the scrubby junipers next to the Church’s Fried Chicken. Then a few days ago they vanished. I’d only been in there once to plywood the window and stretch caution tape across the door. The unit was a total loss, littered with Sudafed boxes and spent cans of Dran-O. The whole property stunk of ammonia. “I don’t think it’s healthy in there,” I said.

“Rodger says not to call the EPA,” she said. “We’ll never hear the end of it.”

He was probably right about that, though I wasn’t going to admit it. And, of course, that was another good reason not to get involved with the police.

I drained my beer and slouched off down the blacktop, flip-flops slapping against the soles of my feet. But I sure as hell wasn’t going straight down to unit 10. A man my age who lives with his mother—it’s trench warfare. It’s every goddamned yard. I had to let her watch me screw around for a bit. So I walked over to the bean-shaped pool, stooping to pull a few leaves from the water. Then I wandered out to Highway 98, where I stood beneath our sign, this royal palm tree, painted pink and circled with blinking marquee lights. I listened to them clicking as they made their revolutions. Through the trees I could see the sunlight shattering in the Gulf. I spent a few minutes picking trash out of a squat butterfly palm, and then I leaned against one of our tall sabals. A warm breeze blew against my skin, and I popped the last button on my naked ladies and Mai-Tais.

I watched this girl from unit 3 step out to the curb for a cigarette. Mostly we get retirees at The Royal Palms. Widows. Old ladies in muumuus, with accents out of Baltimore and Queens. Their husbands have worked hard all their lives, only to drop dead at the age of 64. Alone, they wander the flat white beaches of the Panhandle. Nothing but dog-eared paperbacks full of hot Latin love to pass around the pool. That wasn’t the situation in unit 3.

She’d cropped her hair down short, dyed it blonde, and lacquered it stiff as plastic. Freckles spattered her cheeks, like something flicked off a spoon. She was thin as a cable whip, stringy-looking, and she was seriously pissed off. Beneath her cut-offs, I could see her legs were a mishmash of thick tattoos. None of it tourist stuff, dolphins and fairies. This girl had etched skulls and medieval crosses into her skin. Indecipherable phrases. Bizarre runes and coiled serpents. Mother must’ve checked her in, as I hadn’t seen her before.

“Good afternoon,” I said, walking along the units.

Charley Henley was born in Maryland. Growing up, he lived everywhere from Prince George, BC and Bozeman, MT, to Jackson, MS and Livingston, AL. He attended the University of Montana in Missoula, where he majored in philosophy, delivered pizza, and spent his free time mountain biking. He received an MFA from the University of Alabama and a PhD from Florida State. He now lives with his wife and children in Cincinnati, where he teaches at the University of Cincinnati. His fiction has appeared in Best New American Voices, Another Chicago Magazine, The Greensboro Review, and Copper Nickel. Amazon.com's imprint, Story Front, has recently published his short story, Satellite Mother.