The Bus Stop On Brownwood 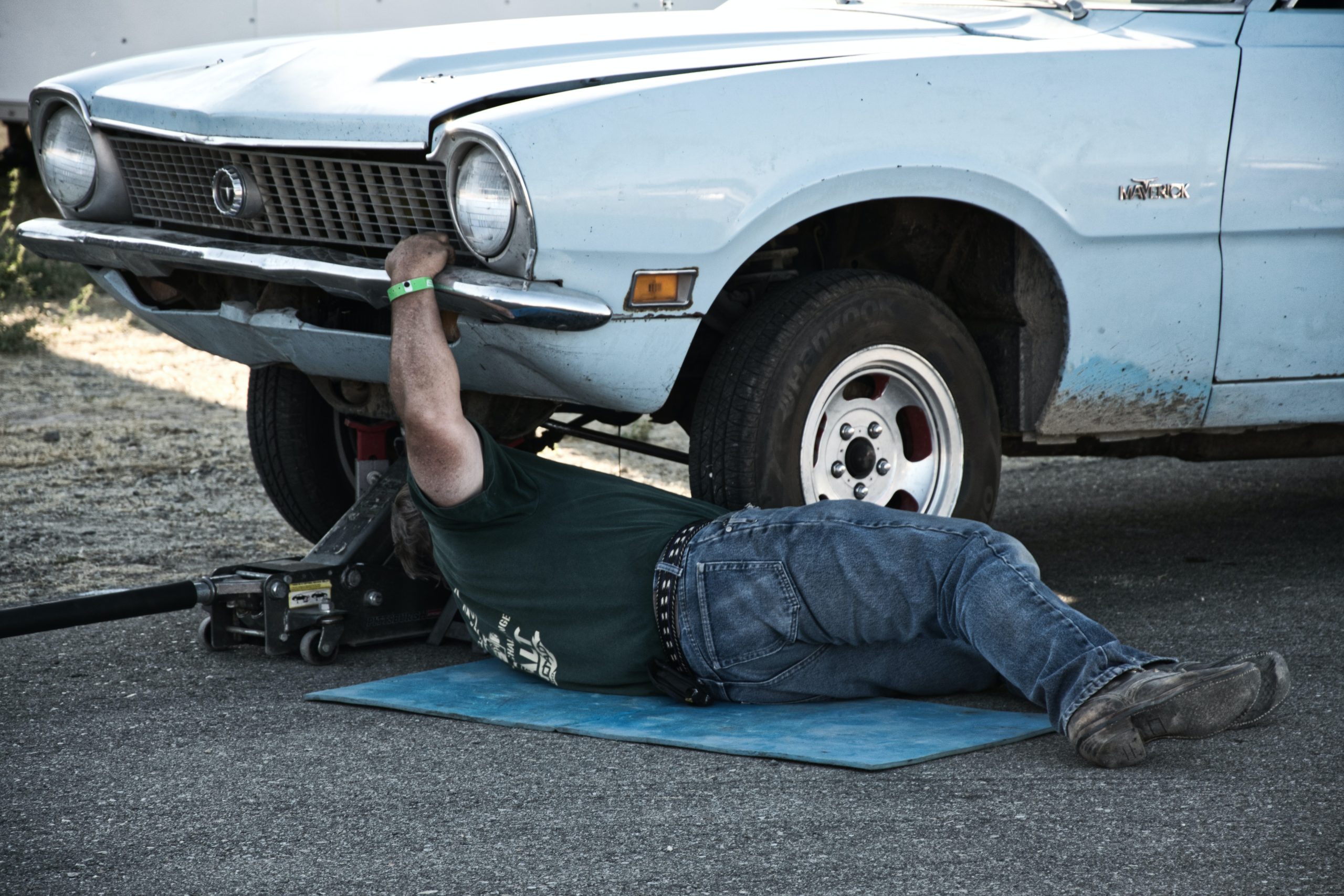 Across Brownwood Avenue, the corner lot was filled with broken cars. The driveway was blocked off by a sliding gate that had been secured to a fence post with a bike lock and a loop of heavy chain. Nothing was getting in or out. A fence stood tall and rusted between the auto shop and the sidewalk that bordered it.

It was early on a Monday, and hot. Steam rose off the pavement. The entire lot was in a glare and a mechanic sat in a lawn chair in the shade of the open garage, sipping from a coffee mug, watching the day advance. High above him, the sky was broad and blue. There was no real hurry to begin work on the wasted cars; they sat motionless in the lot on their broken frames. On the other side of the road a boy and his father sat at the bus stop.

“What do you know about cars?” the father said.

There was no car for them to get into and they were not waiting at the stop for a particular bus. It was a simply a good shady spot to be seen by contractors driving between job sites in East Atlanta. The boy was trying to get himself a job.

“Trial by fire’s your method, huh? Wait until you have to use the thing to learn how it works?”

A bus arrived. Its pneumatic brakes hissed and wheezed as it slowed, lowered, and opened its doors. The driver leaned back to examine the duo at this stop.

The father held up a hand. “We’re just sitting,” he said. “Continue on.”

The driver sucked her teeth and muttered something about some people. She closed the doors and raised the bus and drove away. The boy watched the passengers alone in their own seats jostle with the movement, clean windows spilling in light, somewhere to go, big distances ahead.

“Where you think you’re going?” his father asked. “You’re not giving up, are you?”

On the other side of the street, a line of cars had formed at the Moreland Avenue stoplight. A truck was slowing to join them. In its bed were four wooden posts like you see at the corners of decks. Overhead, a stack of long boards was strapped to the rack, sagging and flapping at both ends as the truck bumped over a rut in the asphalt. The boy crossed the road, went up to the window and asked the driver if he needed help.

“Not from your skinny ass,” the driver said. “Go on back to school.” He was pale and dirty, hunched forward, clutching his wheel. He’d barely turned his head when he spoke.

The boy came back and sat on the bench in the shade and leaned forward with his head in his hands.

The stoplight flashed to green. There were three directions you could go at the intersection and the boy watched some cars turn and some continue on.

“You’ll find something,” the father said.

The boy looked over at the mechanic shop. Sunlight gleamed on the hood of a fast-looking bright blue car. Its rear windshield sloped down to the a short trunk and there were only two doors. A large ridged grill was fixed between the headlights. You couldn’t see what kept it from working.

“You ever been in a nice car?” the boy asked.

“I’ve been in lots of cars,” the father said. “What kind of question is that?”

They watched some traffic go by.

“I’ve been all over in my time,” the father said.

Birds flew in a small cluster from one tree to another. The boy felt his muscles ache, felt a dryness at the back of his throat. He was sweating, but he wasn’t yet tired, and he knew it was easy to waste yourself in the sun.

“I’m thirsty,” he said, and his father stood up.

“Don’t worry,” his father said. “I got you. But if you get a chance while I’m gone, you better take it.”

The older man went slowly down the block to the Flat Shoals Grocery Market. In the market, he bought a lemonade and asked the cashier if they had any special deals for veterans. The cashier had an earpiece in and he touched a finger to it then asked the man to repeat himself. “Nothing,” the father said. “Let me get six of those Lucky Win scratchers.”

“This tastes like dish soap,” the boy said. “And it burns my throat.” He set the bottle of cheap lemonade on the ground. His father was working on a Lucky Win card, using the ridged side of a house key to remove the waxy coating where bulging green bags printed with dollar signs sat in a row. The bags disappeared, revealing five gray numbers. He scratched away the coating from a stack of gold coins. “No match,” he said.

Powerlines ran overhead near the trees. Another line of cars had backed up from the stoplight to the bench in the sun across the road. In each of them was a solitary driver and plenty of room for others, but the boy saw no sign of any of the materials for labor in these cars. The older man kept going with his scratchers, won a dollar off the six he’d bought. He took the lemonade from the boy and screwed off the cap and tipped it back and drank so that his throat muscles contacted and pumped.

“I better go wait over there,” the boy said.

“I’d go with you,” his father said, “if it wasn’t for my back problems.” He was examining the no-win scratchers as if maybe he’d overlooked a helpful symbol.

The boy went to the stop for buses going the other direction. The sun bore down on him from above the trees that had shaded them on the other side.

Half an hour later, the boy looked over at his father across the road staring off someplace else, and he got up and crossed the road and walked down to the mechanic shop gate. He gripped the rough, rusted chain-link and leaned it into a sag and hollered “Hey!” at the mechanic, who stood up and peered out from his shaded place so that only his nose went out into sunlight.

“You some kind of beggar?” the mechanic called. “I don’t suffer no beggars at my gates.”

“That’s good, but I’m not hiring.” The mechanic sat back down.

“I fix things, boy,” the mechanic said. “This ain’t a cosmetic shop.”

“I could get you tools while you’re working,” the boy said. “I could fetch you oil and stuff.”

The mechanic stood up again. He walked into the sun across the lot to where the boy was leaning. He rested one arm on a metal fence post and looked down the road toward the bus stop where the boy had been. “That your daddy over there?” he said.

The sun had encroached to the edge of the man’s shoes. His head had tipped forward so his chin was on his chest. His hands were folded between his thighs. He might have been sleeping.

“Got a little hitch in his get along, huh?”

They watched the man sitting half slumped in the shade.

“Hang on, goddamnit,” the mechanic said. “Let me make a call.” The boy thought he spoke with some fatigue, as if he’d been through this before.

He let the boy come into his lot. Gave him cold water in a coffee mug and the use of a chair in the shade. Twenty minutes later, a green truck pulled in. In the bed were rakes and shovels, a weed whacker and a lawnmower, some trash bins, a few empty beer cans, and a pair of red-handled loppers. The passenger door was dented.

A wiry man with dark skin the texture of an old baseball glove and a long, half-gray beard leaned over and cranked his window down and grinned. “So you’re the crazy kid that wants to work in this heat,” he said. His teeth were uneven and beige. Back toward his throat, a molar was gone.

The boy said he was.

“You’re crazier than shit,” the man said, and looked him over. “But at least you’re not fat.” He sat threw an arm over the empty seat beside him and twisted the boy’s direction. He was still grinning. “How’s ten an hour sound? Less some gas money for the ride out to get you.”

The mechanic and landscaper exchanged a glance. “I told you,” the mechanic said.

“Of course,” the man said. “I’d hate for you to have to worry over cashing a check on account of me. So are we on or what?”

The boy held out his hand and the driver waved it off. “Hurry up and get in the back,” he said. “My passenger door doesn’t open.”

It smelled of lawn clippings and gasoline in the back of the truck. The boy climbed up over the tailgate to sit among the tools and the driver tapped the back window and the boy gave a thumbs up and they moved out of the parking lot onto the road to wait at the light among the midday traffic. “Good luck kid,” the mechanic hollered after them. He held up a hand.

The mechanic’s hand dropped to his side. He appeared to talk to himself for a moment, then he started walking out past his gate. “Listen, hey, I forgot to tell you,” he said. “If Spencer ever tries to thump you, if he ever gets heated and comes at you with a tool, just walk offsite. Okay? Walk off right on down the road.”

The boy only sort of listened. He was grinning and he gave a thumbs up. He’d never gone for a ride in the back of a truck before.

“You’ll be okay, won’t you?” the mechanic said.

The mechanic had a funny look on his face. The light at Moreland changed to green and he pressed both hands to the sides of his head as they started to move farther away. He waved an arm and hollered. The boy waved back and the mechanic started running after them and a car going the other way honked and swerved and the mechanic shouted something else but the boy had his head tipped back to feel the sun on his face and the curling whoosh of wind.

They rounded the corner and the boy cast a final glance back toward the bus stop: the mechanic was at it now, leaning toward his father with a hand on his shoulder, the older man barely in the shade with his head tipped forward and his hands between his thighs.

Forget those old men, the boy thought. He leaned his head back and looked up.

Powerlines and telephone poles and streetlights passed overhead like items laid out on a bright blue conveyor belt. The boy stretched and hooked an arm over the short wall of the truck bed and withdrew it sharply at the sting of hot metal. Wind lifted up bits of shredded grass from the bed and held them suspended in midair until they picked up speed and the shredded grass scattered. They were making for the highway.

They went down the slope toward I-20 east, and they sped up and the tools began to rattle and gray fumes rose up from the tailpipe, and soon the bus stop and everyone down Moreland was completely gone.

Michael Hicks was a Truman Capote fellow in the University of Montana's MFA program. He has worked as a fisherman, teacher, and carpenter. He currently manages a home repair nonprofit in Atlanta, GA.

Photo by Kevin Bidwell from Pexels.