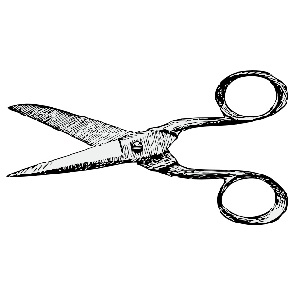 I don’t know what came over me. The morning after Louise said we were through, I got up early and drove to her place. It was still dark. I walked around the back of her building, to her patio. I had scissors with me and I cut all the blossoms off her rose bushes. Louise worked on those bushes all the time, pruning, fertilizing, and dusting them for bugs. Because of the darkness I might have missed a few of them, but I cut all the roses I could find. I walked over to the driveway and I piled the roses on the hood of her Toyota.

I went home and crawled back into bed. I had all my clothes on, but I had forgotten the scissors in my pocket and when I rolled over on my side they jammed into my leg. I hopped out of bed and took the scissors out of my pocket and slid them under the pillow. Then I went into the bathroom and turned on the light to look at where the scissors had poked my thigh. There was just a little drop of blood there, a perfect droplet of bright red liquid. I tore off a piece of toilet paper and wiped away the blood, threw the paper in the toilet bowl and went back to bed. By then the sun had started to come up and I could hear some birds chirping and fluttering in the elm tree outside. I pressed the fingers of both hands up against my nose and the smell of roses was strong and sweet.
When I woke up it was eleven o’clock. I felt refreshed. I took a shower and dried myself off and before I got dressed I put a band-aid over the tiny red mark on my thigh. It wasn’t much bigger than a pinprick, but I didn’t want to take any chances with infection. It never got infected, though, and each day the red spot was a little smaller, but I put a fresh band-aid over the area twice a day, morning and night, for several days, until there was no longer even the faintest evidence of my wound.

“Because she left you?”

“I wasn’t thinking too clearly.”

“I’m okay. I just have some itching, a personal kind of itching.”

Carla, when you packed up all your stuff and left me, I walked around in a daze. I wore the same shirt for a week and never noticed. I burned toast, I burned my fingers. I had long conversations with my dog. I asked him if he thought you’d come back. He looked at me like I had lost my mind.

“Look who’s back,” I said to the dog the afternoon your car pulled into the driveway. The gravel crunched and we stepped out to the porch, the dog and I, and in a moment you appeared at the corner of the house. The dog looked from me to you and back at me.

I thought you’d go wild when you saw your plants rotted black from too much water or shriveled from none at all. I’d put a lot of effort into their care; some of them were stubborn and had to be doused with paint thinner or oven cleaner before I had them looking the way I wanted them. I was expecting quite a scene, but you only sighed and shook your head. “I should have come to get them sooner,” you said. Then you patted the dog and drove away.

Laurel graduated from Wellesley. She’s very proud of it. She graduated twelve years ago, and now she’s a high-powered investment broker and makes tons of dough, but when she’s not at the office she wears a WELLESLEY sweatshirt or T-shirt all the time. She has a WELLESLEY decal on the rear window of her car and she always has a pile of WELLESLEY alumni magazines on her coffee table.

When Laurel gave me the old heave-ho I wrote to the alumni magazine and said I wanted to keep them updated on my activities. I told them I was working as a massage therapist and selling my macramé wall hangings at craft fairs, but that my real satisfaction came through the volunteer counseling I did with the Right To Life movement. I signed it, “Laurel Weinstein, Class of 1998.”

“I respect that, I really do, but this is important.”

“This is not an easy call to make, Janey. The doctor told me I should notify you.”

“Notify me? About what?”

“I’ve got a sexually transmitted disease.”

Willa used to complain that I never made an effort to bond with her cat.
I said, “Don’t be ridiculous, I’m crazy about Cuggles, but I’m allergic to cats.”
“Why don’t you take something for it?” she said. “You’re over here all the time. You don’t expect me to get rid of Cuggles, do you?”

After Willa announced that she never wanted to see me again, I got the idea that I should find a way to kill Cuggles. Logistically, it wasn’t so easy. Willa never let her outside, so I couldn’t run her over, drown her, or strangle her, either. And because of the restraining order Willa took out on me, I couldn’t go near her place at all without big trouble, the kind I don’t need.

Eventually, I came to my senses and dropped the whole idea. Despite what Willa thinks, deep down inside I’m a gentle person. I could never kill a cat. I’m not even allergic to cats. I just can’t stand them. I went out and bought some notepaper that had, down at the bottom, a picture of a cute kitten playing with a ball of yarn. I wrote Willa a note on a piece of that paper.

Dear Willa, it said, I know you never want to see me or hear from me again, but I just wanted to tell you something that was bothering me the whole time we were together. I lied to you about being allergic to cats. I’m not. I adore cats. In fact, they are my very favorite animals. I just couldn’t stand your cat. And that name! Anybody over the age of twelve who would name their cat Cuggles has mental problems the size and scope of which are hard to imagine.

I know, I know. Very juvenile. But it did make me feel better. Briefly.

“If I asked you for a favor and it was really important, you’d do it, right?”

“If it was legal, probably.”

“This is legal. I just want you to call Susan.”

“What am I supposed to tell her?”

“Just have a regular conversation. You know—How are you? How’s work? Seen any movies? That kind of thing.”

“Mostly, but I want you to work something else into the conversation. Real naturally, okay?”

Claire always complained that I couldn’t make a commitment.

“It’s not enough,” she’d say, and her dark eyes would fill with tears.

A couple of months after Claire told me to get lost, I found a pair of her panties jammed down between the mattress and the headboard of my bed. Something inspired me to pull out my camera. I stuffed the panties into a manila envelope and before I mailed it off to Claire, I slipped in a photo of me wearing her panties on my head, like a hat, with my eyes crossed and my tongue sticking out. On the back I wrote, “I’m ready for that commitment now. Hope it’s not too late.”

After Danette said going out with me was the dumbest thing she ever did and how she never wanted to see me again, ever, I found myself spending a lot of time in bars. Sometimes I’d go with a couple of friends, but I would drink so much at these bars that soon my friends wouldn’t go with me and then I found myself alone. I didn’t realize I had a problem until one afternoon when I was home by myself watching TV and drinking vodka straight out of the bottle. I was so drunk the TV looked blurry and I thought there was something wrong with the picture. I went over to the set and smacked it with my hand. It didn’t help, only hurt like hell. I looked down at my arm, trying to bring it into focus. What I saw scared me.

I’d written DANETTE = DEVIL from my shoulder to my wrist with a ballpoint pen. It was a blue pen but the skin was bright red around the letters; I had really gouged it in there. I couldn’t even remember doing it. I went straight to the kitchen and poured the rest of the vodka into the sink, then tried to wash the words off my arm with dish detergent and a scouring pad. It was dimmer, and dimmer still after a week of frequent showers and gentle scrubbing. I wore long sleeves and slowly the letters faded from blue to light blue, to gray, to gone. I haven’t had a drink since, not a real drink. I’m not counting beers.

Todd McKie is an artist and writer whose stories have appeared in PANK, Dark Sky, McSweeney's Internet Tendency, Emprise Review, Twelve Stories, Litro, and elsewhere. His is the opening chapter in Gorge, a novel in stories published by Pure Slush in spring 2012. Todd lives in Boston.

← BULLshot: Eric Freeze
One Fifth of the Damn Kids are Crazy →