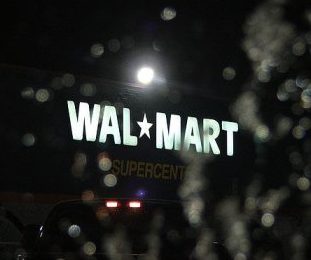 “The First Van Halen album makes Johnny Rotten out to be what he really was and still is: a hairdresser” – Henry Rollins

After my workout I had to go to Wal-Mart to pick up a few things. Toothpaste and body spray. I am out of both.

I’m in an interminable lineup at the till—the woman behind me has a sleeveless tee-shirt on and I can see she’s got some jailhouse tattoos. By “jailhouse” I mean they look like they are done with a razor and a Bic pen. I know this because I have done some time. I did things, bad things—small but bad—and they all added up. Having been incarcerated, I know when someone is looking at me and I can feel her looking on me. When I say “on” I mean her eyes have weight. Her eyes are like her hands, they push and they pull. She has confusing intentions. I have the same kind of tattoos.

It dawns on me: Fresh from the gym I am still sweating a little. Gym sweat is full of pheromones. It comes out of the sweat of a man doing something ultra-manly as opposed to, let’s say, the sweat on a guy after the police stop him and ask him why he’s parked across from a playground for two hours during working hours. Pheromones drive women mad. Seriously, it’s like dragon-scent. Dragons are the apex predator. When the ladies get a whiff of this level of danger-musk they lose their minds. They have to have it.

The lineup moves so slowly. There is an old man trying to pay. His spotted and palsied hands can’t take money out of his wallet save at arm’s length, and with his arms extended like that his eyes can’t see what his hands are doing. The line moves like the hands on the clock in the classroom when I was twelve years old. Please God, don’t let me get old. Please God, don’t let me get slow. I can’t move any faster, I’m stuck behind Methuselah, and I can’t tolerate the tattooed girl’s intrusion any longer so I turn to her and, forgetting to use my “inside” voice, I say: “I HAVE A GIRLFRIEND!”

I’ll be damned nine different ways if she—and a few people in line behind her—don’t just pack on up and go to another till at the other end. I didn’t initially realize it was more than her with eyes on me, all of them with all their eyes just like their hands, all over me for no reason, but whatever. I judge people by their actions. I call ‘em on it. They looked, they pushed, they pulled, and when I called it they all walked away like the guilty walk away, pretending to be anything but.

When I got out I met her for coffee. Soon enough, she took me to her church. Then, like an elopement happens (it just happens), I was going to Bible study with her on weeknights too. On a Wednesday night at our pastor’s house she said that she felt herself to be possessed of something evil, or that she had been afflicted with some sort of sickness. She lay down with her feet and arms bare and we prayed over her body. We lifted our hands and prayed. She lay with her eyes open to the ceiling, looking without blinking, and did not speak. She asked us to “lay on hands” and she quoted to us from memory, from the book: “And He laid His hands on her and immediately she was made straight, and glorified God. – Luke 13:13”

One by one—I was the last—we lay our hands on her and prayed harder. Nothing happened. I walked her home. She still lived with her dad. While we walked she leaned in to me and I could smell her hair and feel the warmth of her breath. She held her sandals by their straps in her left hand, it was warm and she liked to walk barefoot. I told her that maybe next time we would pray harder, that there would be more of us, and that this thing she felt, evil or sickness or both, we’d beat it. I put my arm around her and we got to her place I held her a little longer and then kissed her softly under her ear, right at the point of her jaw. I touched her blouse with my hand and pulled on it a little, looking down at our feet. She walked in to her house and I walked home thinking I was full of grace and I couldn’t remember a single bad thing that I ever did.

Sunday after service she pressed a note into my hand and I read it in the church bathroom. She said that her father had seen me kiss her from the window and that he would have none of that and had forbid her to ever see me—except at service—and that she was no longer able to come to Bible study at the pastor’s house. She did not apologize or say she was sorry about these things. Just wrote ‘em on out. It was, in a way, like her old letters, just shorter.

That’s God. He wants every good thing for himself.

I had a cellmate. He was an old biker who went by the name of “Moon.” Like me he’d done so many small things that when added up they added up to a large number. He told me he used to wake up with methamphetamines and go to bed with heroin. He collected debts for “the club” with a motorcycle helmet, duct tape and a baseball bat. Five am, he’d said, because people party until three and go to work at six but at five am everyone’s home. So they’d be there at five, wake the guy up, duct tape him to a chair, put the motorcycle helmet on him, and then hit him in the head with the bat a few times. The helmet keeps the guy alive but it fucks him up in a particular way. They would make that helmet ring like an empty oil drum in a hailstorm. If it came off they’d tape it back on. Pay up buddy. Don’t wanna hear any more bullshit. Where’s our fucking money? That’s how they did it.

He asked me if I’d ever seen anyone killed. I had not. He told me to watch, some day someone was going to lose his fucking mind in this place and the guards would come in numbers and hold the guy down and then choke him with a baton until he lost consciousness. Once he was out they’d keep choking until the guy shit his pants. “Choke ‘em ‘til you smell shit, is what they say,” Moon told me. They do that, he said, because someone being choked out will defecate just before they die, so they stop when they smell shit. The idea is not to actually kill anyone because there will be an inquiry, and if not charges, at the very least jobs will be on the line. Prison guards have excellent pensions. It’s a conundrum he told me. He and I would kill for a pension like that, but the guards? If they want that pension they can’t kill anyone. Even then, he told me, it’s not an exact science. He said some guys defecate and die. Some guys die without defecating. Some guys actually want to die. Maybe today’s the day we’ll see one.

To this very day I associate defecation with dying and not with just taking a simple shit.

Moon told me that he loved Van Halen. That was his favorite band. He told me that when he first heard them, back in ’77, he couldn’t believe how loud they were, how powerful. He felt bigger just listening to them. Large and in charge, nine-foot tall with a hard-on, bulletproof even. He told me his music and his crimes “were of a time.” I’m not sure what he meant by that. He told me that though, and that the one thing was not indicative of the other. It was just “of a time.”

I got out before he did. He was the best cell mate a guy could have. When I left he told me to go find her, the nice Christian girl that wrote me all the letters, the girl who lived at home taking care of her dad, and to never come back, not even to visit. I understood that. When you go, you’re supposed to be gone.

Steve Passey is from Southern Alberta. He is the author of the Collections 'Forty-Five Minutes of Unstoppable Rock" (Tortoise Books) and "The Coachella Madrigals" (Luminous Press) and many other individual things, found here and there. Tweet to him @CanadianCoyote1

← Trot Trot to Boston
How to Pick Up Beautiful Women →