Excerpts from The Bacanora Notebooks: The Turkey 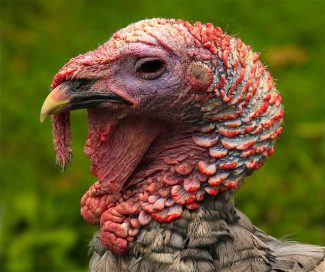 The bottle of Bacanora that Alarico had given me in Mexico sat in our cupboard unopened until Thanksgiving Day. The bottle was a thick antique thing you might find in the barn of an old abandoned farm, maybe a quart, with a cork in it. It had some old Spanish writing on it that was unreadable, like something out of a Roberto Bolaño novel.

Natalia wanted to make a turkey. A turkey for her gringo. She had never made a turkey before. When I walked into the kitchen she was smearing peanut butter all over the turkey.

“What the hell are you doing?”

Natalia had warned me about the Bacanora. She had never tried it but she said it was not to be fooled with. What the hell, it was Thanksgiving! I opened her up and poured a couple of glasses. It was a clear hard liquor that smelled like tequila. Moonshine tequila. Natalia looked at me like I was crazy when I sniffed it and took a sip. Whew doggies! Fire in the hole! They said Bacanora had magical qualities, psychedelic qualities. It will knock your block off.

“If you’re gonna drink that, hold on a minute,” she said.

She cut a lime and squeezed it into the glasses. I took another sip, coughed, wheezed, gagged, spun around in a circle, stumbled and steadied myself against the sink.

I handed her a glass.

“I’m not touching that shit,” she said.

She smelled it and threw her head back.

I poured some of the Bacanora over the turkey and helped her put it into the oven. I think she bought the biggest turkey at the store, the thing must have weighed 30 pounds.

She smelled it again. Then she plugged her nose like she was going swimming and took the tiniest sip, swallowed, and waited for the world to end.

I took another drink, bigger this time, then cracked a beer to use as a chaser.

“Take a drink of beer afterwards,” I said.

She was in her Betty Boop pajamas and fuzzy blue slippers, hair tousled from sleep. She took another sip and then a sip of beer. Then she gave me a “not bad” nod, and took another. I downed my last half-inch and splashed some more in.

And that’s the last thing I remember.

… I was in Arkansas and I was 8 years old. I had built one of my many forts in a gully on our wooded property. I liked to dig around, and in my digging I discovered that my fort was built on an old settler’s dump. The rusted cans were of no interest but I found many old bottles which fascinated me. I rubbed them on my shirt but no genies came floating out, only ants and bugs and worms. I stood the bottles up on an old log. All colors! I talked to them, they were my friends, my treasure, my apothecary, my childhood alchemy. I carved stairs into the dirt to descend into my grotto. I spent every day down there, I had a vine that I swung on like Tarzan. Sometimes I even took my clothes off and swung around naked. I liked to be naked. One night at supper my mother asked me: “What are you making down there?” “Maybe I don’t want to tell you,” I said. A flash of light as my father knocked me on the side of the head off my chair to the floor. The next day my father called down to me in my grotto. He felt bad that he’d hit me. I didn’t say anything, and he started down my dirt stairs which I had made child-size. His big feet hardly fit and with each heavy step the stairs collapsed and soon he was sliding down the dirt hillside. The fat bastard had fucked up my stairs! But he was so dirty and the look on his face was funny as he sat on his ass in my little sanctuary. “Well,” he said. “This is pretty cool.” I was proud and I forgave him…

When I woke up it was dark and the apartment was filled with smoke. We were both on the bed, naked.

I turned on a light and found my clothes.

We were still drunk. The bedroom was almost as destroyed as when her ex had broken in and trashed it. My dick was stuck to the inside of my thigh. We must have had a good time! The kitchen was too smoky to enter, so I went back to the bedroom. I stubbed my toe on the doorway.

“Grab whatever you can!”

I found my notebook and wallet and a few more clothes and Natalia did the same and we went outside. The smoke was coming right up through the roof, all the windows were black. It was just beginning to get light, 5 o’clock or so. I ran back in a couple times and grabbed what I could. We didn’t have much. I threw the stuff in the car. Then we heard the fire engine sirens.

“Get in the car,” I said, “drive around the corner and wait there.”

I didn’t want her there when the firemen arrived. They would be asking too many questions and I didn’t want to risk them discovering she was illegal.

“Don’t go back in there!” she said, and hugged me.

She drove out of the parking lot.

The firemen started a hose and walked into the smoke with all their gear. By the time they came out again a crowd had gathered.

“The turkey’s done,” one of the firemen said to me.

After a couple hours I was allowed back in to see if there was anything I wanted to take. The whole place was fucked. Everything was smoke-damaged and there was an inch of water on the floor. The walls and ceilings dripped. The oven door was open and the turkey was a black glob glistening with water. It looked like a meteorite. I found a suitcase and stuffed some clothes in. The bottle of Bacanora was on the floor in the bedroom and I put that in the suitcase too. I put some photos in and our toothbrushes. I wasn’t thinking straight.

The firemen left. The landlord who lived in the same complex didn’t want to make a huge deal out of it because almost everyone living there was illegal and he knew it. Besides, every apartment in the complex was a firetrap with bad wiring everywhere. Our place and the one next to it were unlivable, but the others were ok. He was standing outside when I came out with my suitcase, a Mexican-American about 60. He was in his bathrobe.

“I don’t want to see either of you around here anymore.”

I walked with my suitcase out of the parking lot to the street and looked both ways. I saw our car a couple blocks away. I noticed then that it was cold.

When I opened the car door Natalia was crying and shivering. I gave her a coat from the suitcase. It reeked of smoke, with just the slightest odor of peanut butter.

I hugged her for a few minutes until she stopped sobbing.

“We lost our deposit,” I said.

We both tried to laugh.

Mather Schneider has had 100s of stories and poems published since 1993 and has 4 full length books available. He was a cab driver for many years in Tucson, Arizona and now lives in Mexico, where he is unemployed. This story is from a 90,000 word manuscript currently searching for a publisher.

← How to Make a Snakeskin Bookmark
Two Stories →