Throw out everything you know about crime fiction. Tom Pitts, author of Hustle and American Static, returns with a plot stickier than an ounce of Humboldt County’s finest. 101 is typical Tom Pitts, the kind of novel that proves he’ll forever and ever have followers, trailing behind him begging for one more hit.

—Eryk Pruitt, author of What We Reckon

Frank Reardon:  Hello, Tom. Let’s dig right in. When did you start writing, or taking it seriously? Did you always write crime fiction?

Tom Pitts: True story: I began writing to learn how to type. Back in the 90s my mind was too unglued to sit still and use one of those early typing programs, so I decided I was going to write a book instead. I was really into true crime at the time and I thought I’d write the story of the North Beach Mafia—as little as I knew about it. When the real work got too heavy and the FBI stonewalled my research, I gave up and started writing a fictional novel. Sort of. I lugged that draft around with me for years. Hard years. It was a little gem I’d tinker with but never made any serious progress. Many years later, when I was off the junk, Joe Clifford dragged my ass to a reading and made me get behind the mike. I think that was around 2010. That’s when it really took hold and I decided to get serious.

FR: Do other art mediums interest, inspire you, to write the way you do?

TP: Way back 80s, I was in a rock ‘n’ roll band. That’s what drew me to San Francisco in the first place. Even then, as a songwriter, I was still interested in the bottom rung, the losers and the ne’er-do-wells. I think that’s what appeals to me in art as well. I much prefer an old black and white picture than a cubist’s interpretation.

FR: I remember we had a conversation on Facebook about Denis Johnson. Although his books do have crime or can be dark, he isn’t known for crime fiction. What about crime fiction interests you to want to write it?

TP: There’re a lot of heavy hitters that aren’t considered crime writers, but fit the criteria. Cormac McCarthy is another. I think it’s the grit that pulls me in. Something down to earth, but still has the elements of drama. I’m more of a John Cassevettes guy than a Spielberg guy, you know? Always have been. I’m the guy watching the superhero movie saying, that could never happen. We talked about Willie Vlautin too. He’s another writer with both feet on the ground. Not necessarily crime, per se, but he’s got that grit that I love.

FR: All of your novels (including the new one) have been published with Down & Out Books, as well as one with Shotgun Honey. Granted all writers want to make a larger stack of cash for their work, also larger distribution, etc. but I have always been a fan of the indie presses. What do you like about being able to publish your books with heavy hitter indie presses like Down&Out and Shotgun Honey?

TP: Down & Out has been good to me. After a reading in Raleigh, Eric made me an offer to re-release Hustle, which was out with Snubnose Press at the time. It was done over a handshake. He just wanted me to dip my toe in the water, to see if I wanted to release my next one with ‘em. They’re up-front, honest, and they give me a lot of control. I’m not sure I’d get the attention I do if I was with a big press. 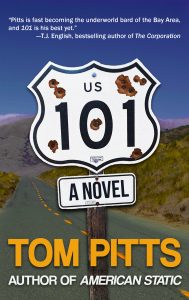 FR: I read 101 and I loved it. You have a voice I think that needs to be better circulated. Your work is dark, tough, also entertaining. Tell me a little about 101, how did the story come to you?

TP: Thank you! From your lips to God’s ears. My oldest son was working for a friend of mine up in the hills of Humboldt, so I had a reason to go up a visit a few times. I knew I wanted to write about the place. It’s the last place in California that’s still a little like the wild west. At first I thought the book was going to be about water. Water is like currency up there. I kept hearing stories of water theft, like someone showing up in the night and emptying the rooftop reservoir tank at the local school, guys waking up to find their pond had been drained, or creek rerouted. Then I saw a movie trailer about some kid going to visit his father who turned out to be a criminal. Now, the kid and his mentor in my book are not related, and I never saw the movie and can’t remember its name or who was in it, but that was it, that was when it clicked.

FR: A lot of readers, myself included, love a good character. You have some real cool characters in your work. They’re not wooden. They have a pulse and they make choices, whether good or bad, they develop, turn, and grow. I admire that kind of skill. Without giving away the book tell us about Jerry and Vic. Where did they come from? Who are they?

TP: Jerry, the kid, was easy. He’s an asshole, a selfish jerk in his twenties. The kind of guy with some shallow charm, but given some time will fuck anything up. We all had a little bit of Jerry in us in our twenties. But Vic was different. I’ve written the cold calculating bad guys before, but I wanted Vic to have a moral compass, a vulnerability. Even though he’s kind of a villain, he’s also a hero. He was good man to begin with, but the trauma he and Jerry’s mother endured forced him to become something else. He’s jaded, and worn, but he’s still got that cowboy core, the code. We all want to have a little of Vic in us when the shit hits the fan.

FR: Talk a little bit about the Emerald Triangle?

TP: The Emerald Triangle is made up of three adjoining counties in Northern California. Mendocino, Trinity, and Humboldt. They’ve always been the spot for weed in the west. Kind of like how Napa Valley or certain regions of France are known for wine. Because I’m an old punk rock guy, I’ve always known people who’ve made their living growing. But, with the onset of medical marijuana, then legalized weed, things up in the Emerald Triangle began to shift, morph. At first it was an explosion of activity, but now it’s over-expanded, over regulated, and glutted out. Big money is coming to squeeze out the mom and pop operations. People thought it’d be big tobacco or other corporate interests, but so far, it’s just money. A lot of it is tech money. That’s why it was important for me to set 101 on the cusp of legalization, when the outlaws were scrambling for what chips were left on the table.

TP: Hmmn, that’s a tough question because our tastes shift so much as years go by. I’ll always love Cormac McCarthy and Denis Johnson. Reading Steinbeck taught me a lot about being direct with your language. Bukowski made me realize that life is perfectly interesting, even when it’s fucked up and boring. And Elmore Leonard. He taught be to put all that literary shit aside and just write the damn story.

As for the three writers:

Joe Clifford, his best stuff has yet to hit the shelves, trust me. Jordan Harper, because there’s a beautiful authenticity to his work. And Johnny Shaw because he’s lean, straightforward, funny, and consistent as hell. He’s like a hipper Elmore Leonard.

FR: When you have your story, characters, ready to go; what’s your process like?

TP: It really only starts with the characters. If I overthink the story too much, I’ll get lost trying to follow it. If the characters feel right, then I try to let the story unfold around them. That way it leaves me a lot of freedom to change direction or add depth. And the process is one scene at a time. If I’m on a roll I’ll get more than one in a sitting, but it’s usually just one. Then I have to mull over what happens next. Sometimes it’s a couple hours, sometimes it’s a couple days.

FR: After the release of 101 what’s next for Tom Pitts? Any new words in the work?

TP: I have a novel called Coldwater that’ll probably be out winter 2020. It’s a story about a couple who move to the Sacramento burbs. There’s an empty house across the street from their place and it’s infested with squatters, or at least they think they’re squatters. Who they are and what they’re doing is much darker. It’s my version of a suburban horror story, you know, one that could actually happen.

TP: Pie, and a savory pie at that. Nobody can live off birthday cake, but in a post-apocalyptic world an endless supply of hardy meat pies would be worth more than gold.

Tom Pitts received his education firsthand on the streets of San Francisco. He remains there, writing, working, and trying to survive. His shorts have been published in the usual spots by the usual suspects. His novel, HUSTLE, is available from Down & Out Books. He is also the author of two novellas, Knuckleball and Piggyback.

Tom’s new novel, American Static, will be released in June 2017 from Down & Out Books

Tom is an acquisitions editor at Gutter Books and the host of Skid Row Chatter, a live monthly broadcast on the Authors on the Air network.