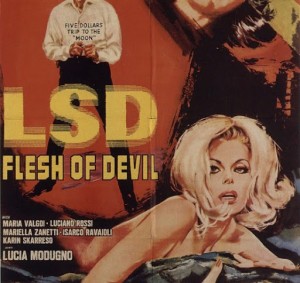 [break]LSD, known as “acid,” The Goose,” “Moon Puppet” and “Rainbow Skittles” was everyone’s favorite drug in the sixties. Most popular amongst van owners, tie-dye wearers and those who lounged behind beaded curtains, LSD affected the brain’s “groove-centers,” causing hallucinations and allowing the user to go on intense metaphysical journeys into their own minds and across the galaxy. However, drugs were officially ruined in the seventies by Disco and we had to go to war on them in the eighties after several years of tedious sanctions.

Scientists in Norway, {one of those fjordy countries that looks like a penis [soft]} have found a new use for LSD. It can be used to treat alcoholism, maybe. Looking at the data from several forty-year-old experiments, the nordic scientists found that people who suffered from alcoholism were less likely to relapse after taking one dose of LSD.

The scientists also added that they had no idea why or how this worked. They posited some theories about the creation of new serotonin receptors, possible changes to perception and memory, and the soothing effects of faerie wings as they gently dusted the chin.

They then urged the scientific community to do more research on psychedelic drugs, adding “we’d be happy to furnish the first sample for free, but after that you’ll have to give us grant money and hang out with us for a few hours.”